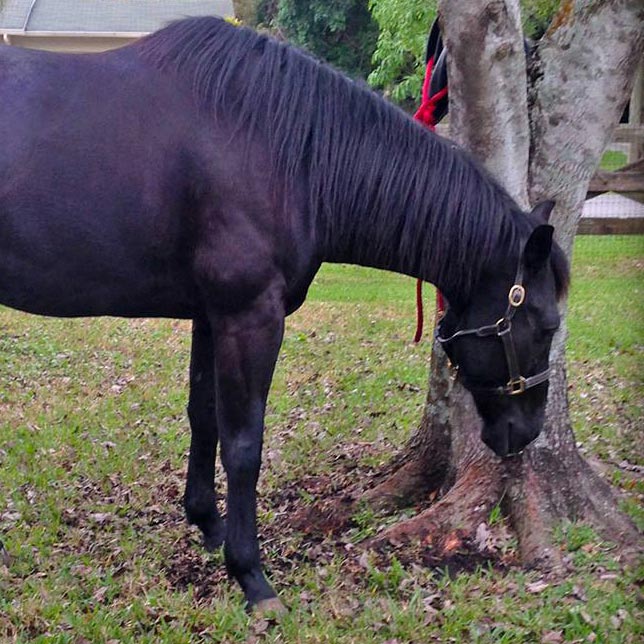 “…Horses are not machines. I followed Alisha’s “Acclimating Your New Horse” instructions and gave Thunder time to settle in. Where I live, many of the equestrian trails leading to parks are parallel to roads, some very busy and noisy. Cars, garbage trucks, motorcycles, bikers, tree-trimmers, barking dogs…

My experience with Diamond J and Alisha has been exceptional; she is as amazing as are her horses.

Handsome, my beloved horse, died suddenly… a few months shy of his 27th birthday. We had many happy years together. I mourned. His pasture-mate pony, Pretty, mourned. When the time was right I wanted to ride again, and fill the voids in our barn and hearts.

The next step was a quest to find a safe, sound, and sane horse. Not easy. When my local search came up lame, I broadened horizons. Google found a black quarter horse named Thunder on Horse of My Dreams. There was something about him, besides his good looks. I sent an email inquiry.

Buying a horse via the internet could be arguably considered crazy. Chatting with Alisha, however, silenced my apprehension. Thunder arrived a week after the purchase; he was as gorgeous as his pictures and video, plus red-sparkled painted hooves, and braided mane and tail. Pretty and I were immediately smitten. Thunder, too, seems to approve of his new home.

Horses are not machines. I followed Alisha’s “Acclimating Your New Horse” instructions and gave Thunder time to settle in. After ten days of grooming, bonding, and riding on the property, I thought he was ready for a trail ride. My horse friends met at my house and we took a pleasant hour-long ride together. Thunder was great. Where I live, many of the equestrian trails leading to parks are parallel to roads, some very busy and noisy. Cars, garbage trucks, motorcycles, bikers, tree-trimmers, barking dogs, nothing spooked Thunder. He was just as sane and steady on the second ride.

The third ride an issue arose. Thunder cried like a baby when it was time to leave his Pretty buddy behind. I’m not referring to a whinny. I am talking body-shaking, stop-traffic, can be heard a block away CRYING. I did eventually coax Thunder to ride out, but his sobs did not cease.

I called Alisha. She was sweet, sympathetic, succinct, and the next day sent me a training strategy that I implemented. In a few lessons, the problem appeared to be solved. Thunder and I had a lovely cry-free ride with pals. However, riding solo, Thunder’s whole focus again became getting back to the barn to see his Pretty buddy.

Because horses are not machines.

My “perfect” Handsome had been a champion racehorse before I owned him. Our initial trail rides were about “winning” whether it was taking off and “beating” an unsuspecting horse walking a half mile ahead of us, or throwing a temper tantrum if we were in a group and he didn’t get to lead. Handsome’s behavior taught me to be a better rider. In time, Handsome trusted my decisions, and accepted me as a partner. Over the years I became a comfortable and complacent rider. Which is good, and bad…

Why should Thunder trust me? We just met. As well-trained as Alisha’s horses are, they are not machines. Horses, especially smart ones, ponder, sense, observe, surmise, inspect, pine for old friends, and draw their own conclusions regarding what is safe and who is worthy of trust and equality. I was the woman whose partner died, who claimed to want a new partner, but who was still figuratively walking around in comfy sweats, squash-back slippers, and a scrunchy in her hair, thinking Prince Charming was going to give her a second look. If I wanted Thunder to think of me as more than food lady, groom, and manure scooper, I had to be new-partner worthy, an equal. I read somewhere that in relation to humans, dogs deem themselves inferior; cats superior, and horses consider man an equal.

With some advice from a trainer who specialized in buddy-sour horses, I ventured out on a leisurely trail walk with Thunder. At the point he refused and wanted to return to Pretty, we returned. But we exercised at the barn while Pretty watched, and then hit the trails again. That first training day we rode out and returned to the barn twelve times over nearly three hours. By the eighth time, Pretty was under a tree at the far end of the paddock snoozing and the confused dogs had given up barking their customary “welcome home” greeting. That said, Thunder still had to do work, without the reward of seeing his buddy who’d lost interest in his frequent returns. By the last ride out, Thunder decided that alone on a relaxed trail ride with me was where he preferred to be. I earned his trust, and our subsequent rides, solo and with friends, have been perfect. I proved myself to be an equal.

It’s our responsibility as horse owners to foster a relationship with our new family member. “Beginning” rider doesn’t mean “clueless” rider. The more knowledgeable one is about the ways of horses, the better one learns to respond to cues, and the stronger the human-animal relationship will be. Happily-ever-after requires work and trust, providing both partners are honest, safe, and sane. Alisha provides horses that are all that, and more.

Like a good man, Thunder has made me a want to be a better horsewoman. I am very grateful to Alisha for being such a gifted match-maker. 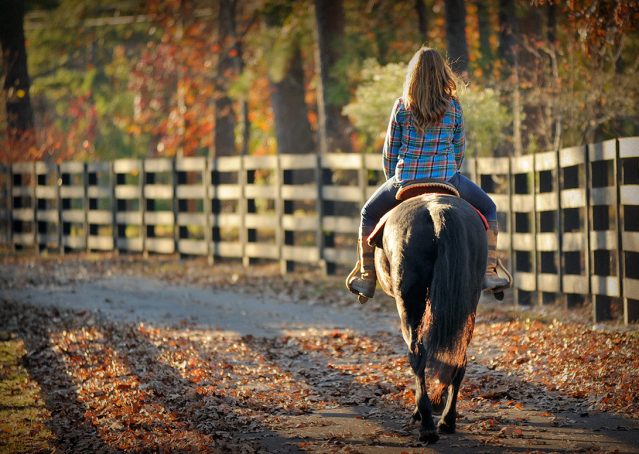 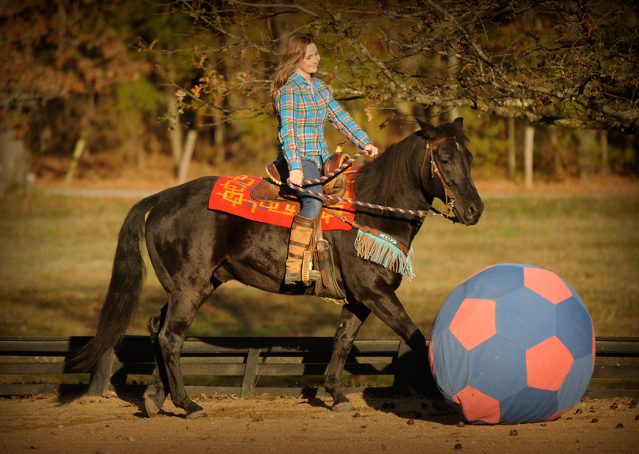 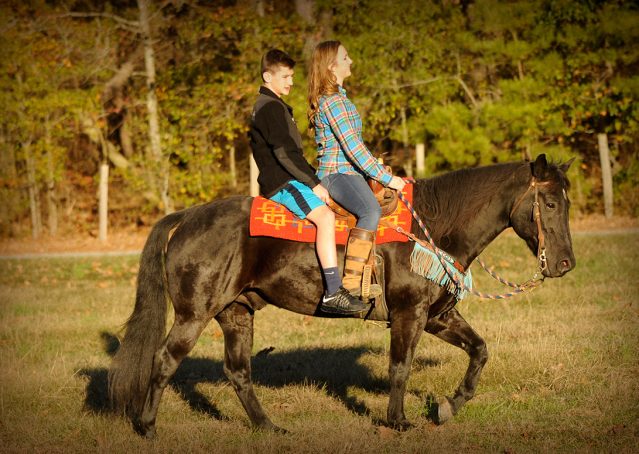 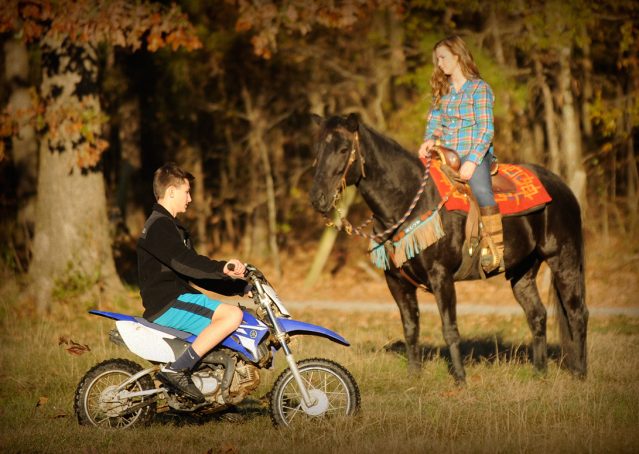 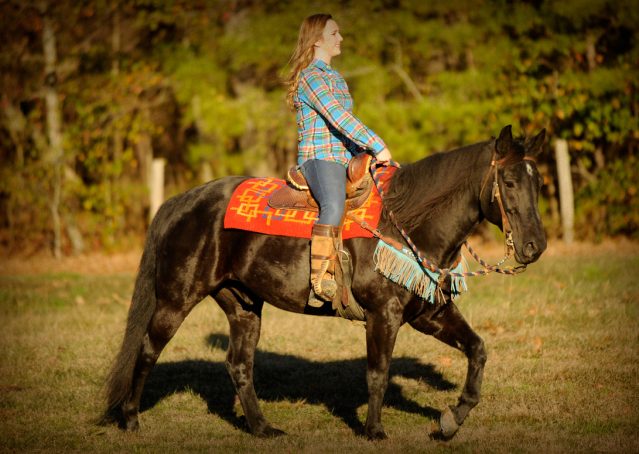 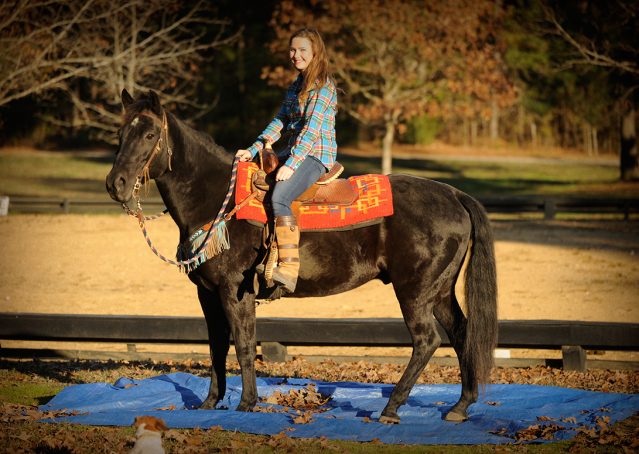 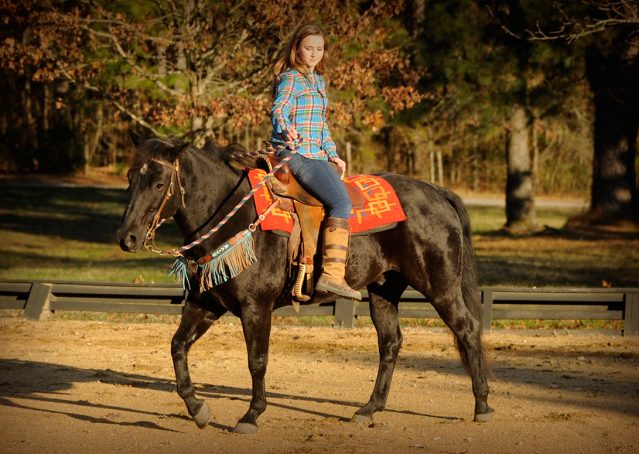 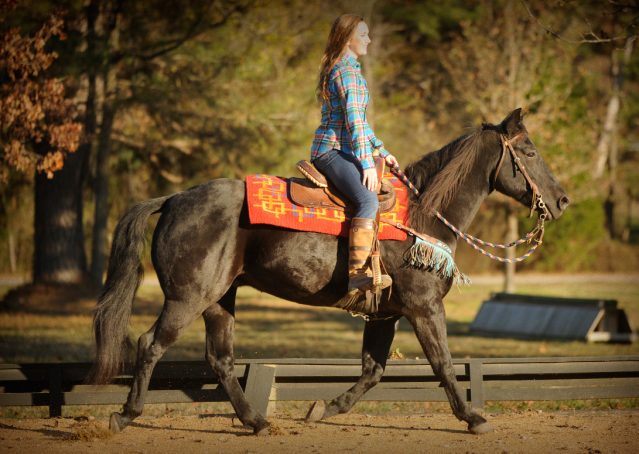 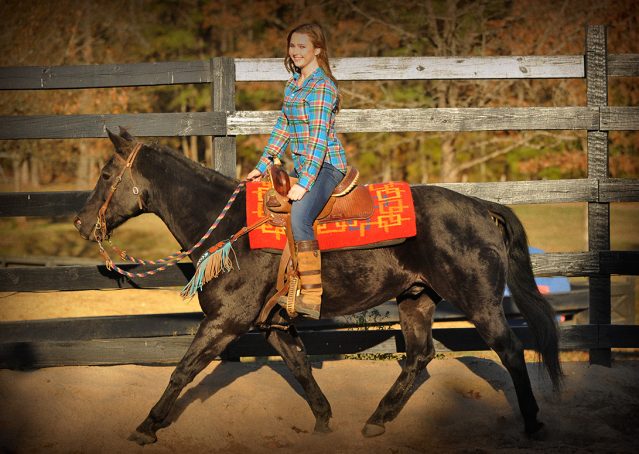 If you are looking for a specific horse or pony for your family, please Click Here to submit our New Customer Questionnaire and we will do our best to help you find the horse of your dreams...